Loch Ness is, of course, most famous for rumours of Nessie, its exceptionally shy monster, but those visitors who come here in the hope of a sighting find that there's so much more to this place than just the possibility of a mythical creature lurking in the depths. This 23 mile long lake with depths reaching 750 metres contains more water than all other lakes in England and Wales combined! Yes, it's a big lake, and as might be expected, the area around Loch Ness has lots to offer in between Nessie hunting.

The village of Drumnadrochit is an almost obligatory stop on any tour around Loch Ness, with both Nessieland and The Loch Ness Centre offering all the Nessie essentials any tourist could want. But Drumnadrochit isn't just about Nessie, the centre of the village is pleasant enough to wander around and with Fiddlers Restaurant and Ness Deli both recommended for a bite to eat. Just outside the village is the iconic Urquhart Castle which can also be viewed from the water on a boat trip from Castle Cruises, or Loch Ness Cruises both of which operate much smaller vessels than the large cruise boats available from Jacobite Cruises at the northern end of the loch and Cruise Loch Ness in the south. Also nearby is Corrimony Chambered Cairn.

Elsewhere on the northern side of Loch Ness there is a good independent plant nursery and garden at Abriachan which specialises in hardy varieties that will grow in local conditions. Please also see our information relating to the immediate surroundings of The Bridge Suite on our Glenmoriston and Fort Augustus page and our separate page dedicated to The City of Inverness.

The much less travelled roads on the south side of Loch Ness contrast greatly with the busy A82 on the north side making the south a far more leisurely and scenic drive. Here you will find the Falls of Foyers, Loch Ruthven RSPB reserve, Dores Inn on Dores Beach, and a multitude of smaller, and much quieter, lochs including one of our favourites, Loch Tarff. A new multi-use long distance walking, cycling and horse riding route, The South Loch Ness Trail has recently been completed which increases access to the south side of the loch and now makes it possible to combine this with The Great Glen Way on the north side to complete a full circuit of the loch, The Loch Ness 360, on dedicated, off-road trails for the first time.

As well as the aforementioned there is great scenery and outdoor experiences to be had virtually everywhere you look around Loch Ness. In particular we would recommend Divach Falls, Abriachan Forest, Farigaig Forest, Allt Na Criche and Loch Killin.

Loch Oich is a relatively small loch, particularly in comparison with its famous neighbour to the north, and the only village in the vicinity of Loch Oich is Invergarry which, although not a "touristy" place is pleasant to wander around with some nice nearby walks around the local woodland and along the River Garry. The Invergarry Hotel serves good food, as does the Glengarry Castle Hotel which offers a very good value Afternoon Tea.

At the northern end of Loch Oich is Aberchalder where the historic and very well preserved Bridge of Oich crosses the River Oich, alongside which runs the Caledonian Canal which has a very pleasant towpath route that runs north from here all the way to Fort Augustus. Also from Aberchalder are pleasant walks south following The Great Glen Way along the now disused railway track along the eastern side of Loch Oich all the way to the abandoned Invergarry Railway Station at Laggan which is in the process of being restored and transformed into a railway museum.

Also at Laggan, at the southern end of Loch Oich, is The Great Glen Water Park and Active Highs which provides a whole range of outdoor activities and watersports such as Canyoning, White Water Rafting, Abseiling and Kayak Safaris.

At the northern end of Loch Lochy is the lovely Laggan Locks which has a small harbour area which provides wonderful views along the length of the loch, moored here is the Eagle Barge Inn floating pub/restaurant for a dining experience with a difference. Nearby, on the road to Kilfinnan, is the start of the most popular route for hiking to the summit of Ben Tee which, being an isolated singular peak surrounded by lower ground, has amazing panoramic views for many miles in all directions.

Close to the southern end of Loch Lochy is the village of Spean Bridge which has a general store, Spean Bridge Mill shop, a petrol station and a couple of eateries. On the road north of Spean Bridge is the stunning Commando Memorial with its beatutiful backdrop of the Nevis Mountain Range which is particularly scenic when capped with snow. Halfway up the hill towards the memorial, just before the layby, the view of Kilmonivaig church with the same backdrop of the Nevis Range is one of our very favourite roadside viewpoints

A little to the east the parallel roads of Glen Roy are not man-made, as their name might suggest, but a striking geological feature - the three horizontal streaks cutting across the hills on both sides of the glen mark the water levels of a vast lake that filled the glen 10,000 years ago.

East of Loch Lochy, at Achnacarry, is the Clan Cameron Museum. Also in this area is the Eas Chia-aig waterfall which is easier to access than most waterfalls being right at the roadside at the end of the Dark Mile on the B8005, a road which then leads along the side of Loch Arkaig, a lovely, and generally quiet, drive that leads deep into remote mountain scenery. 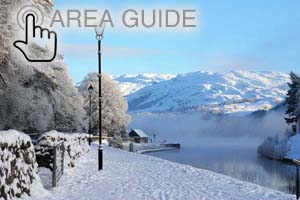 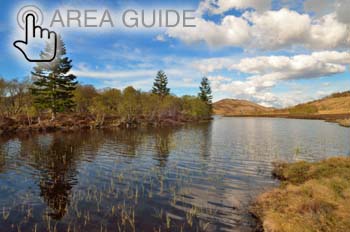 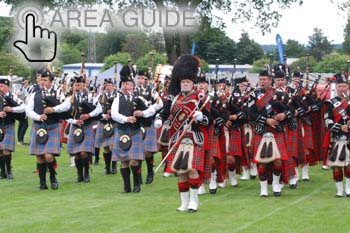 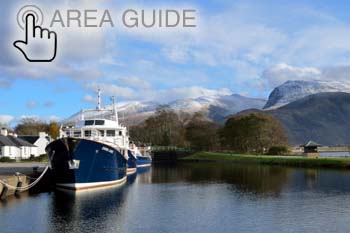 Located at the southern end of The Great Glen and at the base of Ben Nevis, Britain's highest mountain, Fort William is known as the outdoor capital of the UK. 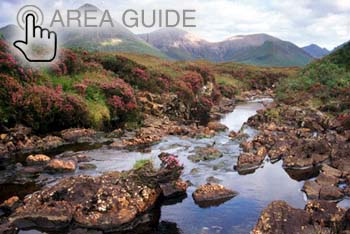 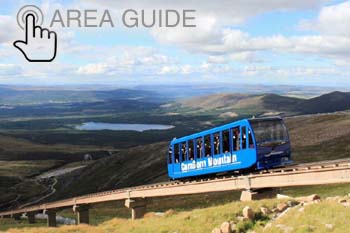 The Cairngorm mountain range is part of Britain's largest national park which has plenty to offer and can be explored within a day's drive from The Bridge Suite.